Ian was one of those very focused individuals (background) who are a privilege  to know (and it was a bit scary at the time). I knew him as a mechanic, hands on engineer, and motorcycle road racer. We never shared the sailing side of my life … something I would do differently, Ian would have loved to ride trap on my Hobie 16 (and more so on the 18).

Even though he did not directly participate in the sailing he helped support the efforts directly and indirectly. Ian fixed a manufacturing problem with my Hobie 16 with a spectacular welding job on a sand casting that held for years until the true source of the problem revealed itself. (The port forward post wasn’t set square when the hull was laid up … it was just off a touch, but that touch stressed the casting beyond it’s design limits and when I drove the boat hard it broke, again and again. I got very good at replacing sourcing and replacing bow castings.)

More importantly Ian taught me to not rush. To stop when things are going wrong (during mechanical assembly – but the rule has broader applications). Then to take things apart, figure out what is wrong, and try again. And most importantly, repeat until the assembly goes together at least as well as it was designed – if not better.

Another one of those lessons Ian taught me (mostly by example) was to take time and look at what you have done (after it is done and tested) and look at the work, and the subsystem in the context of the whole – in this case a vehicle that needs to be reliable when things get tough.

It was this looking again that helped me catch a problem that existed from the time the engine was installed in the Evening Light. Very specifically, the throttle quadrant on the engine block rubbed against the raw water feed hose. It happened only at idle, and only if you had pulled the engine back to idle at the forward helm station. (Remember the Evening Light has two helm stations). Even more insidious, this rubbing was on the back side of the hose in a spot that was difficult to check without pulling out an inspection mirror.

Once again that basic lesson Ian taught me, saved me. So once again Ian, thank you for those lessons. 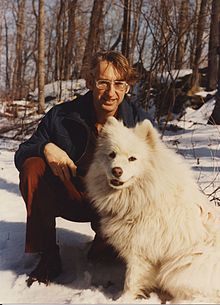 s/v Evening Light at anchor on the Tappan Zee

On the hard – New York